Sovereign Farmers, are the Landlords of Their Own Land 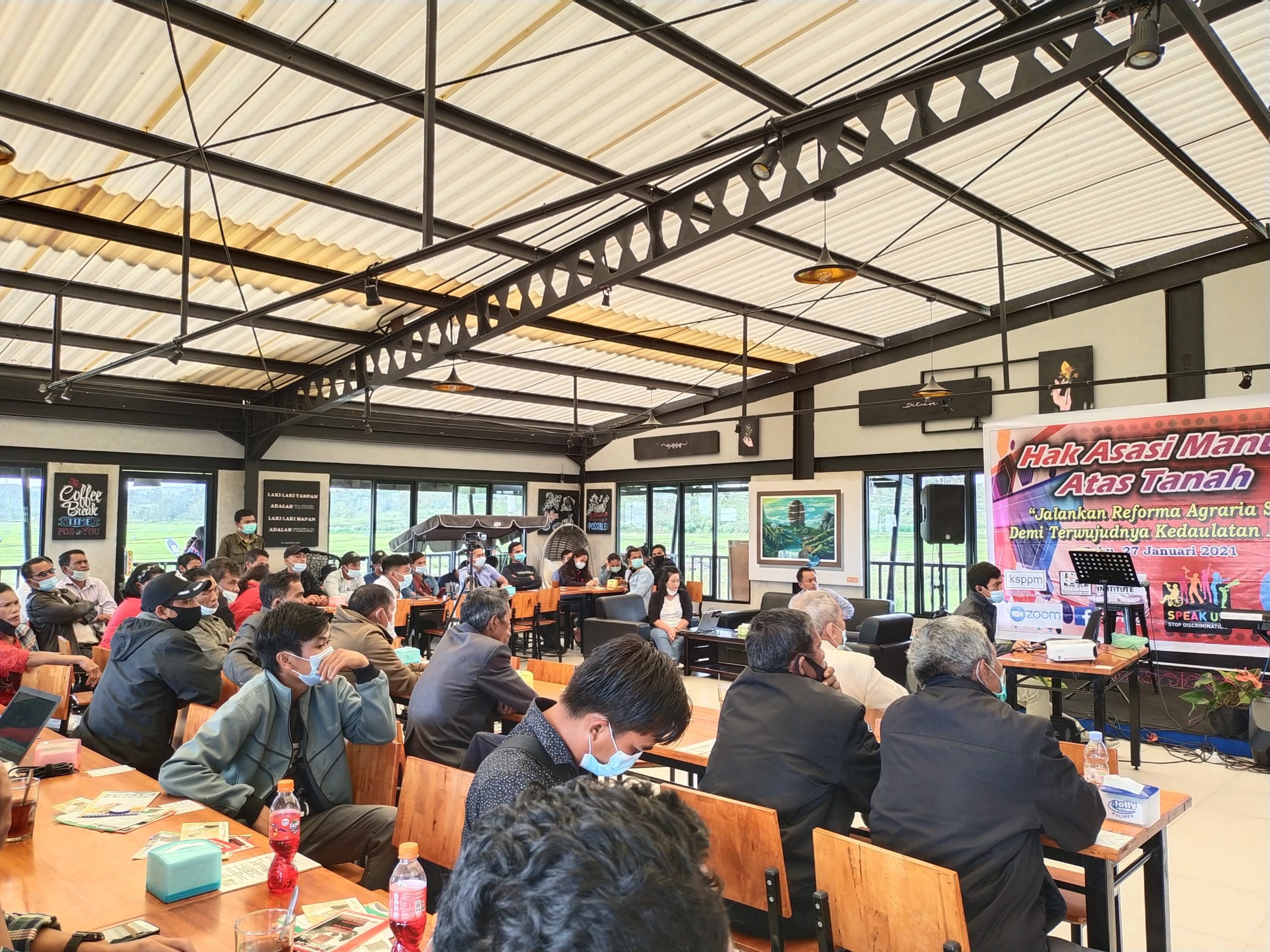 Dolok Sanggul (27/01/2021), the making of Humbang Hasundutan district as an area for the development of the National Food Security program has generated a lot of debate. There is a lot of confusing information due to the lack of socialization and consultation with potentially affected parties, especially regarding the status of land ownership and its impact on the environment. Therefore it is necessary to build discussions involving many parties so that the general public can get complete information regarding this program.

Seeing this issue as very important, KSPPM and AMAN Tano Batak held a seminar “Opportunities and Challenges of Indigenous Peoples in Maintaining their Customary Lands Amid the Food Estate Development Program in Humbang Hasundutan Regency” in Dolok Sanggul.

“Meanwhile, the area proposed for the Food Estate (FE) program is in the APL, covering an area of ​​4000 hectares. The initial phase will be carried out in an area of ​​1000 hectares, and currently there are 215 hectares that have been worked on in the Siriaria village, ”said Halomoan.

Dewi Kartika, Secretary General of the Consortium for Agrarian Reform (KPA), in her presentation explained that the Food Estate program, if studied more broadly, could be a new form of appropriation. “Quoting the KPA year-end note, the number of agrarian conflict eruptions throughout 2020 was caused by the number of National Strategic Projects (PSN), one of which is the Food Estate program. Programs that emerged as a result of the food crisis during the pandemic that the country is currently experiencing. The food crisis that is currently hitting the government is quick to give permission to investors for the realization of this FE program. Meanwhile, it is very difficult for indigenous peoples to defend their customary lands, and those who are the majority of them are farmers who are forced to become laborers in their own land, ”said Dewi.

Dewi Kartika gave an important point that food sovereignty is achieved if Agrarian Reform is implemented.

In line with Dewi, Prof. Posman Sibuea, professor at the Catholic University of St. Thomas Medan, also emphasized that the Food Estate must ensure that farmers become masters of their own land and not the other way around. Prof. Posman Sibuea also highlighted the potential for environmental degradation so that it needs special attention from the Humbahas Regency Government. If not, the Food Estate program will repeat the failure stories of similar programs in the past, as happened in Central Kalimantan, Papua, Ketapang and Bulungan. “Farmers’ sovereignty is a solution to food problems in Indonesia in the future, not creating green capitalism,” said Prof. Posman.

Slightly different from the previous source, Poltak Purba, a member of the district DPRD. Humbang Hasundutan, argues that the Food Estate program is a gift for Humbang Hasundutan that other districts desire. Because surely the positive impacts outweigh the bad effects. As the people’s representative, he is also willing and open to accept public complaints regarding the implementation of this program.

The seminar, which was attended by 100 participants (25 online & 75 in person) received very diverse responses, some responded optimistically, pessimistically, and not a few were still confused about land ownership schemes, capital, and relationships with investors.

Responding to various responses, Roki Pasaribu, as the moderator, reminded that criticism of this program does not mean anti-development, but criticism and input is available to improve a better development system in the future.